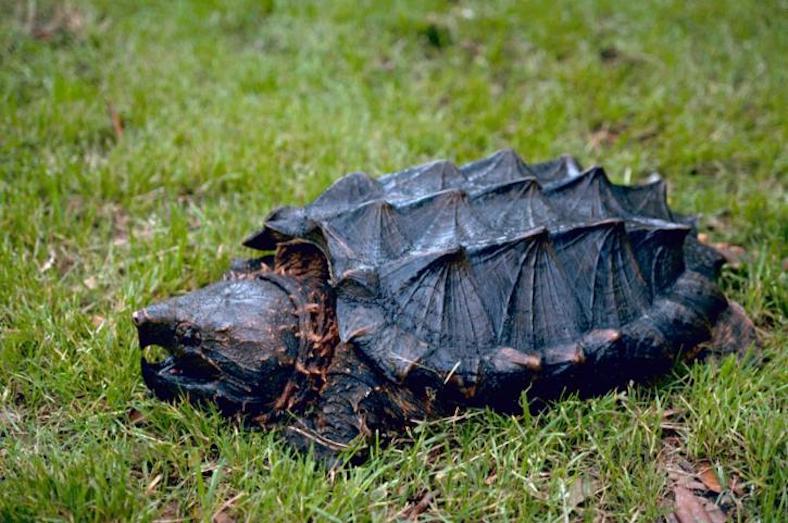 Years ago we lived in Texas, just a block from a university. Our family loved walking and riding bikes around the campus, especially near the arboretum, where there was a large lagoon that our kids referred to as the frog pond. The university was bordered on one side by a busy four lane road, and one day a monster-sized alligator snapping turtle three feet across — the kind I’ve only ever seen in the south — had parked itself in the middle of the road. Cars were swerving around it but I’ve always had a soft spot for turtles, no matter what kind, and I couldn’t bear the thought of it being hit. I stopped. I stood in the street, directing cars around the beast, which was not at all grateful and actually became more ill-tempered. This went on for a while until a man assessed the situation, stopped his pickup, got out and took off his shirt. He brandished it with great panache, not unlike a toreador in a bullfight, until the reptile got so aggravated it could take no more. It turned faster than I would have ever thought possible and angrily gripped onto the cloth. The turtle didn’t let go and the man dragged it out of the road and to safety at the pond. The backed-up traffic started moving again and I went on my way. Later, when we lived in Atlanta and that city was renovating its zoo, there was a fundraising campaign encouraging people to adopt an animal. I remembered Texas and made the appropriate donation for our family to parent the facility’s resident alligator snapping turtle. It seemed fitting. And It’s only now when I think about it, I wonder how — or even if — that man in Texas retrieved his shirt.