Bacon, by any other name……… 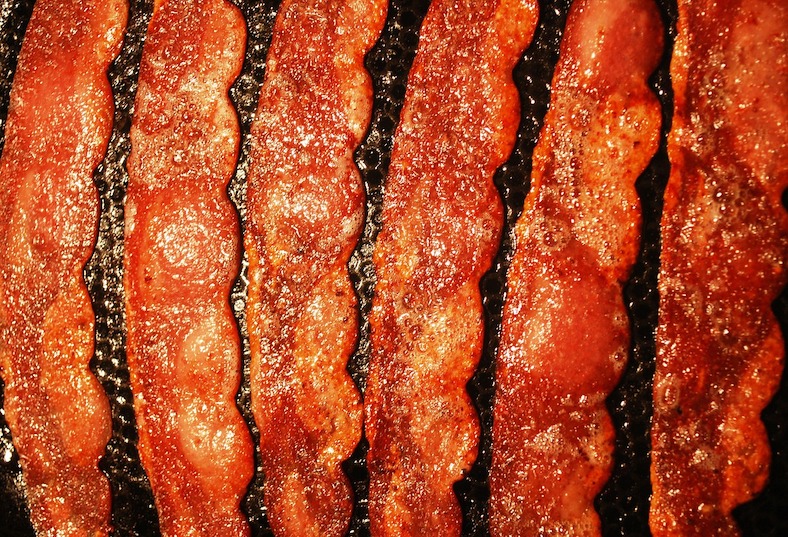 I’m not overly fond of bacon, partly because I can’t stand how the smell gets in my hair when it’s cooking but here’s how we came to have it this morning: I recently had a birthday. Our out-of-town family came to help me celebrate and I invited a bunch of other people too. Side note: We have a six-month old terrier puppy. We think Luna is adorable and I was pleased everyone else seemed to think so too. During the party, our puppy was passed back and forth, sitting on laps and even riding on someone’s shoulders, after which our son’s standard poodle rolled her around the yard like a stuffed toy — all of which Luna appeared to enjoy immensely. She didn’t realize she’d had enough until it was too much and she snuck into the bedroom-now-office and peed on the carpeting. I became paranoid that it would happen again and the next day, Luna was confined mostly to the kitchen — which included closing her away from the downstairs of the house. The cat’s litter box is downstairs and being unable to access her normal toilet, the cat went into the office and peed on the carpeting in the same area. I forgot to mention that a couple of days before this big weekend, we’d had the carpet professionally cleaned. So I went charging off to the pet store and bought a new spray foam product made by a well-known company and not bothering to test it first, applied it vigorously, literally soaking the rug. I was immediately overwhelmed by the heavily perfumed scent, which was worse than the initial problem. Enter — or re-enter — the carpet cleaner Sean, whose name I always confuse with the fence mender, Randy (whose name is actually Roger but that’s another story). Once determined that we had the right person on the phone and that Randy was indeed Sean and not Roger, he came and treated the carpet to get rid of the perfume. I imagined this morning that I could still detect a small mixture of smells so I decided to cook bacon, which will pretty much cover any other odor.  And that’s the reason my husband got to enjoy bacon for breakfast.