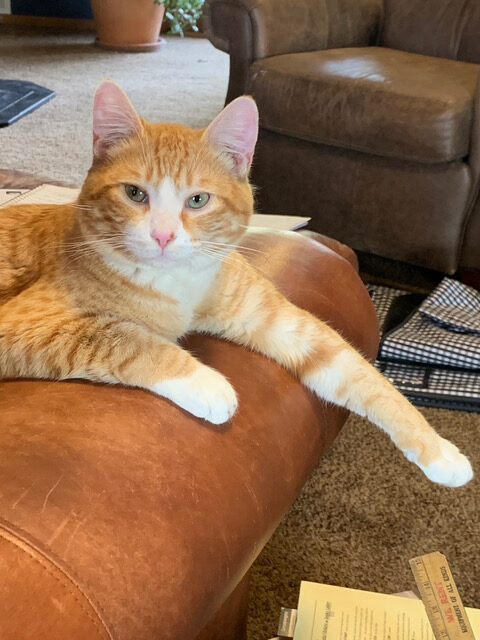 Just over a month ago I was greeted by this cat meowing loudly at our back door. I opened it to get a better look and he muscled his way into the kitchen, totally ignoring our small dog, who was barking in his face. He was starving and, of course, I fed him. Immediately he made himself comfortable, taking over the dog’s favorite place on the sofa and declaring himself boss. He was interested in anything happening around the house. He followed the Roomba while it cleaned the floor, loved to play in running water, was enchanted with the printer, and even liked the hair dryer. He loved to watch television. The plan was for one of our sons to take him to Seattle to be a companion for the cat he already had, but when he came to visit, the cat’s feelings toward our son bordered on hostility. A week later, another son was here with his two kids. The cat was perfectly content to be carried around by the kids but didn’t care for that adult male at all either. The cat continually tried to make our dog a playmate, but Luna couldn’t figure out how to interact with this clawed creature and spent most of her time either ensconced in her crate or hiding under the bed. I talked with an amazing cat rescue that was willing to take our boarder because we’d taken him for an extensive veterinary visit, including vaccinations, micro chip, neutering, worming, and antibiotics for an abscess he had when he arrived. We’ve always had both cats and dogs but never a small dog who could not adjust to a feline sibling and after all, Luna was here first. So Obi — yes, now he even had a name — went to a foster home and then to a permanent home. The rescue organization sent me pictures of Obi, looking regal and relaxing in a cozy armchair in his new place, a large bulldog lounging on the floor nearby. And Obi was definitely in charge.