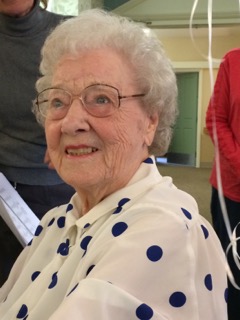 My husband’s mother died six weeks ago.  She lived to be a hundred years old and endured severe dementia for many years, though her attitude remained positive — she was almost always smiling.  Last summer she suffered an ischemic event that everyone — including her doctor — thought would end her life and she rallied once again except for the ability of cognitive speech.  She immigrated from Sweden with her parents when she was very young and experienced difficult life events as a child in this country — yet she steadfastly moved forward. Conventional classes and test taking were not easy for her but she was one determined woman — and after a few exam retakes, in her fifties she attained her license as a real estate sales person.  She went on to achieve a license as a broker and became Realtor of the Year in the firm where she worked in upstate New York State and later, again where she lived in Florida. Until the last two weeks of her life, she was not ready to give in or give up.  The resiliency and indomitable nature of the human spirit is a truly amazing thing.