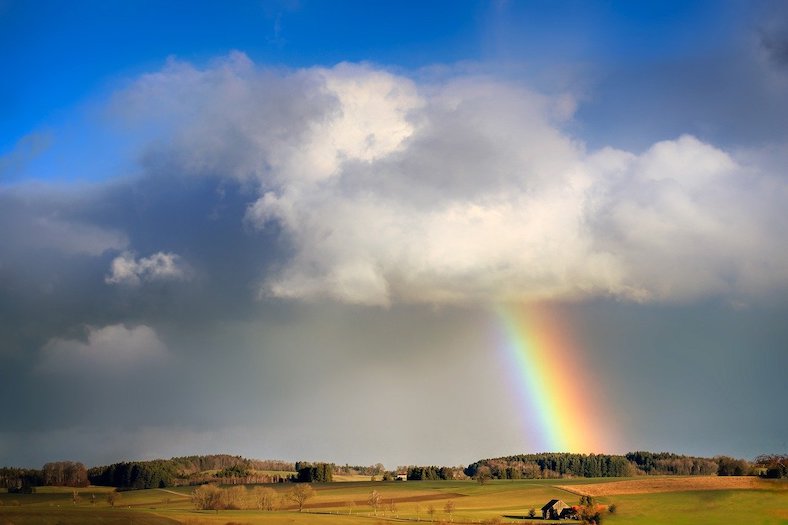 The other day I looked out my car window and saw part of a rainbow. Just a piece of one, in the middle of the sky. It wasn’t large, in fact when I held my arm out, it fit nicely between my stretched-out thumb and forefinger. I couldn’t see the rest of it — but I knew it was there. I remember another rainbow, years ago when we lived in Maine. Our good friends had spent the day at our house and while their three boys played with our three boys, we sat and talked until the kids were at least partially worn out. They left, and ten minutes later came rushing back.They had seen a huge rainbow and drove back in a hurry to tell us, to make sure we didn’t miss it. Friends who would return solely for a “rainbow alert” will never stop being special to me. Another time, my husband and I were at a small restaurant, taking part in the time-honored Friday night northern Wisconsin fish fry ritual. We went out the door of the restaurant and there in the driveway of The Broken Arrow was the shimmering end of a rainbow. I wouldn’t have thought something as ethereal as a rainbow would hang its hat in the driveway of an unassuming eating place but there it was. People don’t believe me.They say it’s impossible to see the end of a rainbow, but that evening I stood in definite solidarity with Roy G Biv. I didn’t see a leprechaun or pot of gold but I felt the luck o’ the Irish in the multicolored light.