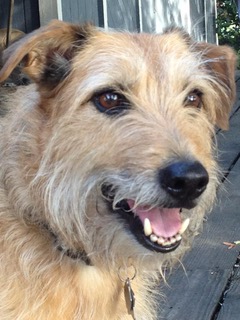 My beloved dog, Cinnamon, is dying of cancer. I know this, she doesn’t.  She didn’t look at the x-rays, didn’t hear the veterinarian give us the somber results of the ultrasound.  She is just going about her daily life, rolling on her back in the grass, digging holes and going on long walks with me, while in anticipation, I grieve at the upcoming loss.  Over a year ago, she had a large tumor that was able to be surgically removed but this time, sadly, that’s not the case. Over our years together, my husband and I have had ten dogs, very often in multiples, and — apologies to Barney and to Jake, two other great dogs of note — this scruffy little creature has been the best.  She came to us as a rescue twelve years ago, when she was two or three years old.  Her life had likely not been an easy one.  A hiker discovered her abandoned out near the so-called Priest River Slough, about forty miles north of where we live.  She had six newborn puppies with her.  This Good Samaritan took her to a local shelter, where I happened upon her during a search on PetFinder.com, looking for a companion for our other dog at that time.  She has been the most devoted, grateful dog imaginable, practically Velcroed to my side over the years.  She’s patient with children who know no better than to poke their fingers in her ears.  She’s a wonderful traveler and has camped with us around the country, equally excited to hike the canyon lands of southern Utah or swim in the cold water of Lake Superior.  Plus she’s adorable, though admittedly she failed to win the Benji look-alike contest that I was so sure she had nailed when I entered her.  Except for her very early years, she’s had an exciting, long life and excluding the chipmunk she once killed and requested that its tail be hung on her collar, has not gone unappreciated.  I will miss her always.