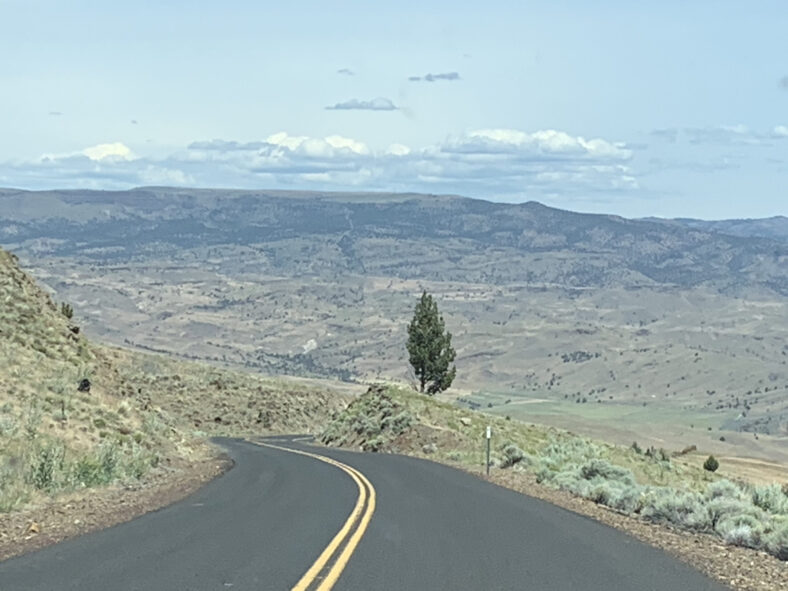 I wrote this a year and a half ago after a trip through central Oregon and, after submitting it to a place that has published some other stuff of mine, was told this wasn’t a fit. Maybe it was one of those “you just had to be there” things, maybe the ending smacked of too controversial a subject, maybe the editors just plain thought it wasn’t good. But I still like this piece.

(Most often I use photos from Pixabay. I took this picture where the essay actually takes place.)

The high desert of north central Oregon is a land swept by relentless wind. A bare landscape marked by great rocky cliffs and outcroppings of basalt. Rugged mountains peppered by muted green stands of tough western Juniper. It is desolate. It is harsh. It is lonely. And it is one of the most beautiful places I’ve seen.

I was heading north after several days in the dense Ponderosa Pine forests of southern Oregon.Turning left at an isolated crossroad, I found myself in the town of Antelope. A piece of plywood with large red hand-painted letters and an arrow pointing to the left stood at the corner.

I decided to take a chance. Presiding over the cafe, a friendly woman in her mid-fifties, blonde hair in short braids. A lone customer, a young man dressed in a variation of camouflage, sat at the counter. The restaurant accepted cash only. No cards or checks. That left me out. Reconciled to finding another place down the road, I turned to leave and the young man said, “I got this”. He stood up, and on his way out laid enough money on the counter to pay for my meal.

He went out, and the cafe’s proprietor, also the elected mayor for the 56 people in the town of Antelope, told me he is the guy who does the daily postal run. He shares the job with his brother, and six days a week one or the other of them drives the 170 miles to Portland and back, covering the rural winding route through this part of the state.

A little high on the cafe’s homemade triple berry pie, I professed my infatuation with Antelope. The owner proceeded to talk about a house for sale just down the street. She pumped me up about the property, told me an old man had lived there and, when he died, his family decided to sell. She said it has been reduced to $50,000. Said it was located on a good sized lot with lots of fruit trees and an out building. Said that people usually live to be over a hundred out here in Antelope, because there’s no stress. The house would make a great VBRO she went on, and I could use it when it wasn’t rented. Have my own little getaway right up here in the mountains. Prices are low, she said, and went on to tell me to look behind the cafe up on the hillside at her large place, which she got practically for a song. I asked about medical care out here. No problem, I was told. If something happens, we call the volunteer fire department and you get air lifted to Madras or Bend, you’d be there in no time.

In the early 1980’s, an organization known as the Rajneesh movement established itself in Antelope, and effectively took over the government by outnumbering the original residents with new voter registrations. Members voted to change the town’s name to “Rajneesh”, which didn’t exactly sit well with the local farmers and ranchers. Both sides took up arms. Things escalated. There were accusations of mass food poisoning and a botched assassination plot to murder a U.S. district attorney. And now the Rajneeshees are gone.

Down the dusty street I walked, looking for the real estate sign. I turned at the corner where a large two-story dilapidated structure stood, and the home was next to that. It was a small unassuming frame house in dubious condition. Peeling yellow paint and dirty, white-paned windows. A yard waist deep in weeds. Another vague sagging building twenty feet away. I had a little trouble holding onto my dream but I plowed through the brush, intending to look inside, hoping for a diamond in the rough. As soon as I set foot in the yard, two weathered looking men from a similar place across the street came over to check out the situation. After some chit chat and dropping of the mayor’s name, they warmed up and passed along stories about what I had for the past thirty minutes envisioned as my vacation-rental-by-owner property.

This was the local whorehouse, one of the men told me. The outbuilding is “where the girls lived”. Admittedly, this information boosted my estimation of the place. The falling down building on the corner, he said, was a hotel in its previous incarnation. In the early 1900’s, the town of Antelope, like the nearby ghost town of Shaniko, were known for sheep, but as cattle took over the rangeland, sheep ranchers were forced out.  “Can’t have sheep and cattle on the same land,” my self-appointed historian said.

I wondered what it would be like to live here in this close-knit community of 56 people in such an isolated area surrounded by steep, uninhabited mountains. I walked back to my car and looked up the hill where the cafe owner’s house stood. My remaining enthusiasm faded when I saw on a tall pole in the front yard, a large United States flag and underneath, an equally large Confederate flag. Taken aback, I stopped in the cafe one more time and asked about the Confederate symbol. Did she have southern roots?  Had she moved here from Mississippi or Alabama? “Nope,” she said with a shrug. “I grew up right down the road in Madras. My husband just likes NASCAR.”

Maybe, I thought. Maybe he does. The wind keeps its secrets in the high desert.