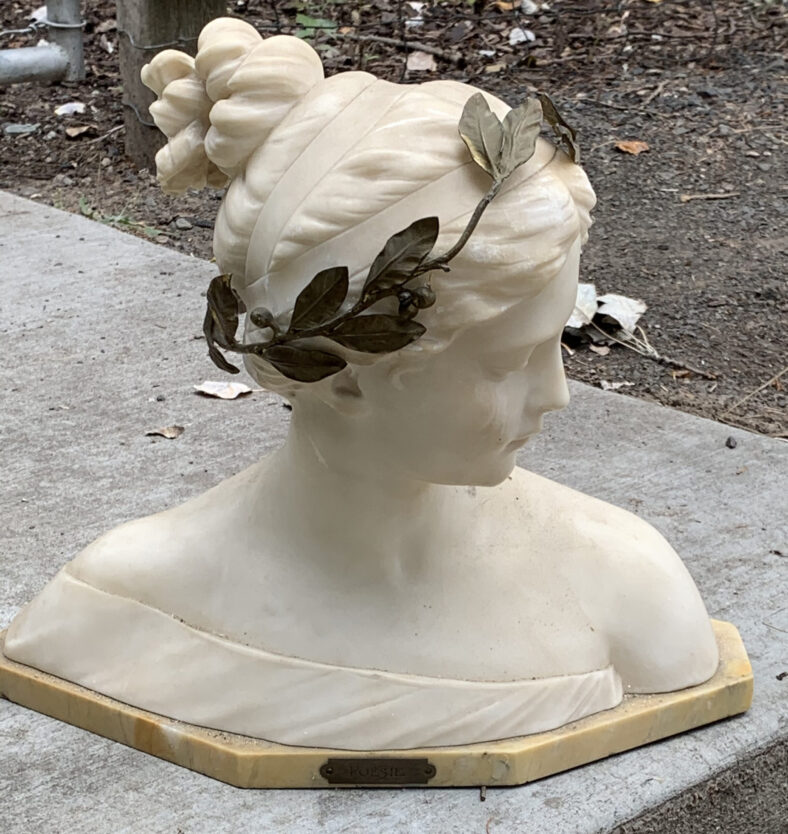 My husband’s mother treasured a large marble bust a friend had brought her from Paris in the 1950’s. “Poesie” was white, delicately featured and wore a leafy garland around her head. She was what my mother-in-law valued more than any of her other possessions. She always referred to her as “Posy” and I eventually quit trying to explain that “Poesie” was not the same as a flower. When Margaret gave up her large home in upstate New York, Poesie moved with her to a condo in Florida. When Margaret’s dementia became more pronounced and she couldn’t stay there, we brought her to the Northwest and of course, Poesie came too. She and Poesie resided contentedly in assisted living for several years and after Margaret began to wander, she and Poesie moved to a nearby Alzheimer’s facility. Margaret was prone to falling and though she never broke her own bones, Poesie was one time knocked to the floor and sustained a chip in the back of her head. Marble statues have never been cherished by either my husband or me, so poor Poesie was stored in a box for several years. Last fall I decided she deserved a new home and I advertised. A wonderful man who was appreciative of her cold beauty came, wrapped her gently in his arms, and took her home. He even loved the small chip in the back of her head, saying it “added to her story”. He was about to move to Kansas City to be near family — so Poesie will have lived in France, in upstate New York, in Florida, in Washington State, and now has residence in Kansas. I think she’ll enjoy the Midwest, it’s a new adventure.