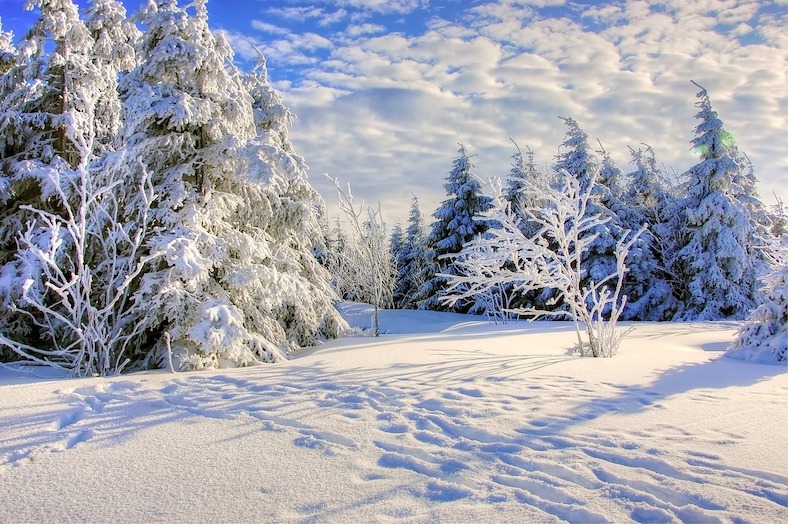 We’ve had the mildest, most unusual winter that I can recall in years.  Days and days of mid-fifty degree weather, sunshine and no snow.  The mountains have snow but down here in the valleys, we had a few inches of the white stuff in December, just enough for a Bing Crosby Christmas, and then poof……………..gone.  The lilacs were even beginning to think about budding.  Admittedly, it’s been easy, not having to move piles of snow around but overall, not a good thing climate-wise.  Here in the Inland Northwest, we depend on winter snows to renew the underground aquifer that’s our water supply, and a winter devoid of snow can also mean an unusually harsh fire season later in the year.  So though a lot of people remarked how pleasant it’d been, underneath ran an undercurrent of concern.  Then yesterday morning, we woke up to almost eight inches of fluffy snow. The trees were coated and the roads hadn’t yet been cleared so everything was beautiful, white and clean. Nothing was cancelled, of course, because snow is something we normally deal with on a regular basis at this time of year so I decided to take my own personal snow day. Wednesday is the day where I usually go to two adult education classes but yesterday instead, I played hooky. I trudged through the tire tracks, down the yet-unplowed road for a couple of miles with my dog who, it appeared, enjoyed the snow even more than I did.  I read, I wrote, I played the piano, I drank hot chocolate, I worked on a sweater I’ve been knitting.  I hung up the handmade card that my husband gave me and found out that best of all, he had no plans either, except to take me out to dinner later in the day, which made it extra special.  After all, it was Valentine’s Day.