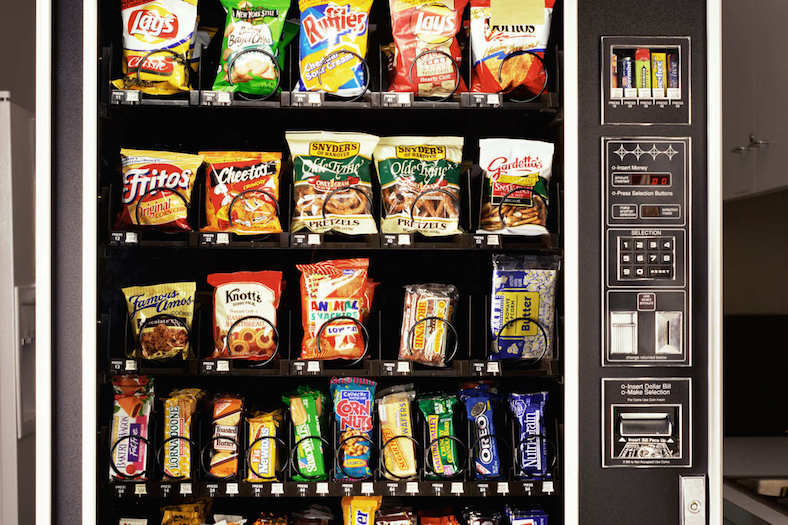 I’ve been on an adult education binge this winter, balancing three language classes over two days every week.  It’s awesome for someone who loves communication as much as I do, though some days I wonder if I’ve taken on more than I should have.  One of the great things is that there are no grades, no grumpy teachers, no bullying classmates, no scolding for homework uncompleted.  The classes are just plain fun and everyone’s supportive. On Wednesdays, one of my sessions ends and the next one starts half an hour later, leaving me minimal time to switch my brain from one to the other. I usually remember to bring something for lunch and eat between the two classes but last week, I left home late and figured I’d grab a snack from the vending machine in the building and power through, until I went home at two o’clock.  The vending machine wasn’t as valuable a resource as I’d hoped it would be and after staring at it for a while, I chose the thing that seemed the least offensive, a small bag of Cheezits.  I inserted my coins into the slot, the machine ground and whirred, the metal spiral that held the Cheezits turned, and then………….my snack got stuck. The building custodian, an always amiable man in his mid fifties, happened to be nearby and I asked him if it would be against his principles to shake the machine a little.  “I can’t believe that machine didn’t give a sister her Cheezits!” he declared huffily and didn’t waste a minute, setting the apparatus rocking and rolling in the hallway. My snack inched forward, little by little, but in the end refused to give way.  He stopped, thoughtfully scratched his head and said, “You know?  I’ve got me a hankering for a bag of those Cheezits myself.”  He put in coins of his own, pushed the buttons and the second bag of Cheezits pushed mine forward with his, depositing both in the tray at the bottom of the machine. A small act of kindness, hardly worth mentioning………….yet it meant a lot, at a time when so many things are petty and mean.