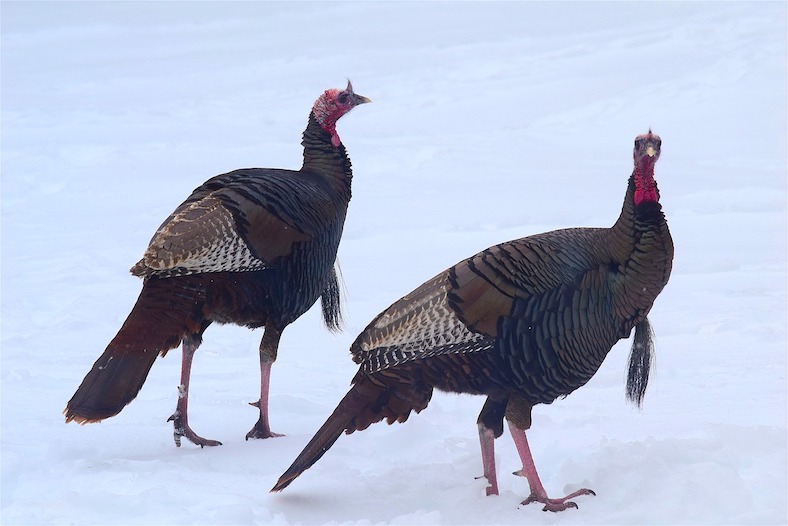 It was just a matter of time before the wild turkeys discovered that there’s birdseed available here. Various hunters have told me that turkeys are clever birds and though it impugns that reputation, I have to say that I find them to be about the dumbest birds I’ve encountered.  They fly over the fence onto our property, yet can’t figure out how to leave.  After they’ve eaten their fill, up and down the fence perimeter they run, looking mournfully at the other side and gobbling in confusion, unable to figure out the logistics of fencing. Wild turkeys are large, greedy birds and I don’t relish the thought of them making themselves at home on a daily basis, roosting in the trees, eating food that’s not meant for them and generally making a mess. So I regularly shoo them away but am only occasionally able to muster up sympathy for their lack of brain power. They run the fence line, at intervals poking their tiny heads on long necks through the wires of our field fencing and panicking, when their huge bodies don’t follow through the four inch square openings.  They can’t seem to recall that they flew over over the fence to get here in the first place.  Eventually I give up and open the gate far out in the back, and commence to herding them out.  I try and gather them in a flock but they prefer on one-on-one attention and while I corral one, the others continue to run back and forth nervously, all along inside the fence, for the length of the entire acre.  I go back for another bird and repeat the ritual.  Sometimes I bring my dog for moral support but her primary interest lies in turkey dinner and I don’t want to deal with a large carcass if she actually does one in — or worse yet, if she manages to only maim it. So back and forth I go, until each one is out of the yard. It affords the neighbors great entertainment, watching my obsession with evicting these feathered pests. My husband yesterday pointed out that the turkeys now have me trained to escort them royally through the gate.  It’s an interesting thought.  Maybe I’m the one, rather than the turkeys, whose intelligence should be called into question.