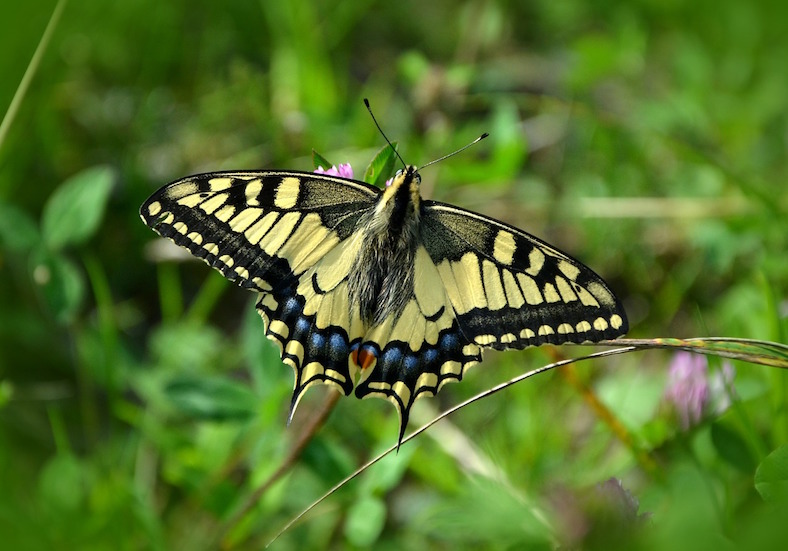 Earlier this week, the screen in my kitchen window was honored to be the guest host for the birth of a beautiful yellow and black Swallowtail Butterfly. I would have liked to have been offered the role of midwife, instead this gorgeous creature was born in the wee hours of the morning, before I was out of bed. As I sat at the kitchen table and drank my morning cup of tea, I looked up to see her — a large, colorful butterfly caught between the screen and window.  It perhaps hadn’t been the smartest place to put a cocoon — if I hadn’t been around and noticed it, her large wings would have kept her trapped between the window and screen but that wasn’t the case.  Her pupa, appearing not unlike half of a narrow cigar, remained stuck to the top of the screen.  I went outside and carefully removed the screen to free the butterfly but as a newborn, she wasn’t yet strong enough to take flight.  She fluttered down to the wide arm of a wooden chair, then skittered uneasily across the deck where she eventually sat and rested next to a hosta plant.  I watched, mesmerized as she seemed to breathe in her surroundings while repeatedly opening and closing her wings, becoming accustomed to her new form.  After about ten minutes, she lifted herself and flew up and up and up.  The last I saw, she was flying high up through the leaves of a tall maple tree and heading northwest.  Imagine going to sleep a slow moving, earth-bound caterpillar and waking up with an ability to soar!  The experience definitely reinforced my belief in minimal regular window washing.