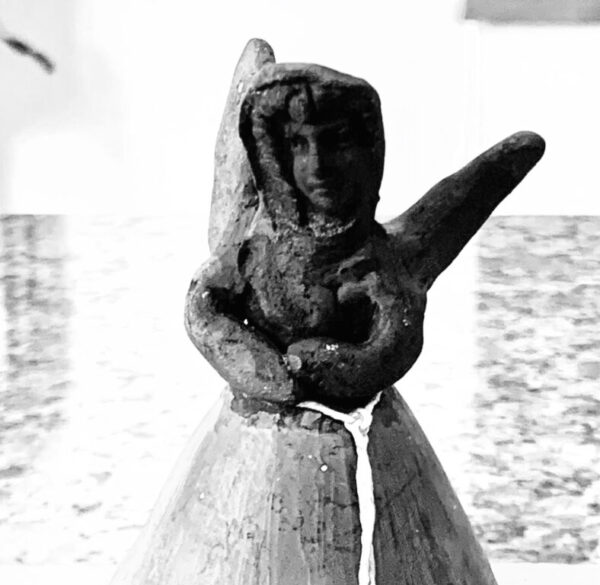 I was going through a box of old stuff, and there she was. Again. An angel, hand-fashioned of clay and baked hard, her skirt a smooth bell, with the ringer attached by an inside string. I know where I got her, I’ve just never been able to figure out what to do with her. She turns up every so often and has been around so long, I’m only vaguely surprised when I see her. I don’t know why I’ve felt compelled to keep her, but I decided it was time to right what felt like an old wrong. When I was in the second grade, a boy in my class and his sister, who was a grade behind us, invited me home to play after school. It was an adventure. They had just moved there, and in a town of a thousand people, anyone new was bound to be interesting. The family had taken over the big three-story hotel downtown. Being a tourist destination, there were a lot of motels and resorts on the lakes, but it was the only “real” hotel. It sat on a prominent corner and occupied a large lot at the end of the two blocks that comprised our business district. I remember we went up to explore the attic, where we found boxes of long-unused and probably forgotten things. The boy picked up this clay angel and handed her to me. “You can have this,” he said and I took her home, where my mother promptly told me I needed to return her. “It might be important to the family,” she said. “You can tell someone made this. They’ll want it.” I was normally an obedient child, and I don’t know why I didn’t do as she told me. Maybe I didn’t want to hurt the feelings of the children who gave her to me, I don’t know — but she stayed with me all through the years and I have dragged that poor angel over the eight different states I’ve lived in during the fifty-plus years of my marriage. She has never occupied a place of honor or even been acknowledged, but always quietly waited in a cardboard box with other odds and ends, in an attic, a basement, or a garage. Until now. I decided it was time to return her and started an online search. Sadly, the first thing I discovered was the boy who had given her to me had died a number of years ago. The family had only lived in my hometown for a short time but still, I hoped I might find a connection there. The town has a Facebook page and I started by asking if anyone knew what had happened to that family. There were a few conjectures, along with a possible married name and a maybe-location for the girl, who would now be as old as I am. I searched online some more, I took a picture of the angel and sent it along with my contact information, to what I hoped might be the correct person. Two weeks later, it was returned as undeliverable. I did more research, came up with the same name in a different city in that state and sent my letter again. A week later I got an email response. I had found the right person. The woman didn’t recall a lot about the statue in the photo and didn’t know why her brother might have given her to me, but she was touched. She and her brother had been very close, she told me, and when they were apart in different parts of the hotel or in their house, they developed their own secret knock to use between the walls. She missed him tremendously and wondered if the angel turning up now might be his way of letting her know he’s all right. I thought it was a lovely idea and I packaged the angel carefully, placed her in a box and mailed her. She arrived in time for Christmas.