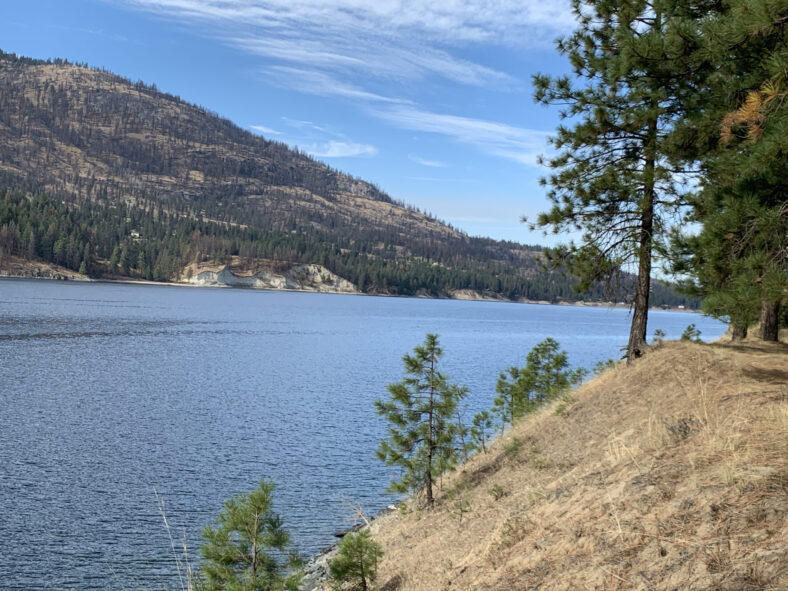 We camped last week along the Columbia, the “Great River of the Northwest”. After the completion of the Grand Coulee Dam in 1942, this part of the river became the 130-mile long Lake Roosevelt. The existing town was flooded. The falls, which could be heard several miles away, were submerged. The place where native people stood and netted a million pounds of salmon a year, gone. The kiosk at the entrance to the campground contained the usual colorful handouts available at all national parks and recreation areas, and I also grabbed a copy of a pamphlet encouraging a tour of the original town of Kettle Falls, known in the 1890’s as Meyers Falls.The founders of Meyers Falls, according to the brochure, envisioned an eventual “metropolis” along the railroad line there in far northeastern Washington State. A hand-drawn map depicted streets called Broadway and Delaware, with historic buildings plainly marked. We set off for town, eight miles away, to learn more. Kettle Falls has a population of around1,500 and it didn’t take long to explore the place. The streets were marked with prominent signs, but we searched in vain for ones called either Delaware or Broadway. We drove up and down, back and forth, more than once. Nothing. We tried the local information center in the old train station along the highway and it was locked. We stopped at the local library, but covid-restricted hours meant no one was working.  We found a city government building and took the brochure inside. “Good heavens, are they distributing that at the campground?” the woman inside asked in alarm. “Yes, that was the old Kettle Falls, but it’s totally submerged. You might see a few foundations when they draw the water down in the spring but that’s it.” We went back to our campsite on the river bank and as I looked across the wide stretch of water, I wondered what the metropolis planners of Meyers Falls would be thinking.

(Photo of Lake Roosevelt taken from our campsite near Kettle Falls, WA)